Meet Frank Gehry. Much of Gehry’s work falls within the style of Deconstructualizm, which is often referred to as post-structualist in nature for its ability to go beyond current modalities of structural definition. This can be seen in Gehry’s house in Santa Monica. In architecture, its application tends to depart from modenism its inherent criticism of culturally inherited givens such as societal goals and functional necessity. Because of this, unlike early modernist structures, Deconstructivist structures are not required to reflect specific social or universal ideas, such as speed or universality of form, and they do not reflect a belief that form follows function. Gehry’s own Santa Monica residence is a commonly cited example of deconstructivist architecture, as it was so drastically divorced from its original context, and in such a manner as to subvert its original spatial intention. 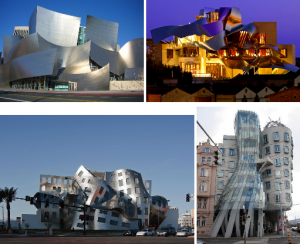